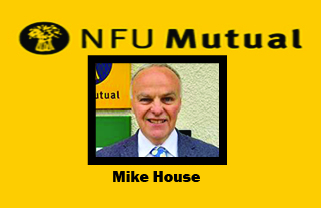 Margaret Thatcher was prime minister and Yazz and the Plastic Population were top of the charts when Mike House joined NFU Mutual back in 1988.

After 32 years as an Agent for the company he’s retiring and moving on in 2020 to work with the NFU Poultry Group in the South West representing and protecting the interests of its sector members. However He won't be far away as he'll be working from home and from near Frome - and he's already been working on the poultry sector alongside his work in NFU Mutual.

Mike initially worked from the Weston-super-Mare offices when he first joined but in 2007 with business increasing the NFU Mutual moved to the Forge on the Stables Business Park. Two years later the offices were too small so to accommodate them Tom Dalley of the park had The Granary especially prepared for Mike and company.

Brought up on a Somerset dairy farm, Mike has a BSC (Hons) degree in Agriculture and with his long experience has an inside knowledge of all aspects of insurance and specialises in farming and business protection.

Mike said the main changes in his time with the NFU Mutual had been rationisation in the farming industry. In his role as an NFU Secretary he said: "The development of farm assurance has improved food hygiene giving it an edge over its competitors. There's been changes in the way the farming industry is managed but Somerset is a grass growing county and so it will always feature livestock farming. The Levels in particular are ideal pasture for beef and dairy."

Tom Dalley of the Stables Business Park said it was sad to see Mike depart but on behalf of everyone at the Rooksbridge site wished him well in the future.

To contact NFU Mutual at Rooksbridge call 01934 806890 or visit https://www.nfumutual.co.uk/agent-offices/rooksbridge/?utm_source=gbl&utm_medium=organic